How to Keep From Being Desensitized to Abortion

I have been a sidewalk counselor on the frontlines of the abortion battle for 6 ½ years now. Being on the sidewalk, I have seen and heard it all. I am out there several days a week while an average of 20-30 babies die 6 days a week. I am often asked how I deal with the despair of what is happening.

Honestly, my overwhelming emotion out there is rarely despair. I focus instead on God’s miracles, saved babies, and repentant hearts saved even at that desperate place. Nonetheless, while pondering this subject, I was scrolling through Facebook. My newsfeed is always filled with videos, reports, and news about pro-life ministry. I paused at a delightful video of an active unborn baby apparently frolicking in the womb. And then, with horror, saw the baby being ripped apart and sucked away in seconds in an ultrasound-guided abortion. I cried out loud, “Oh Lord Jesus, forgive us! How can we do this?”

My angst watching the sudden unexpected and graphic violence of an actual abortion was profound. I thought with mounting grief, I stand a hundred feet from this happening thirty or so times each day in just one abortion facility. It was nauseating.

God showed me, very painfully, one antidote to becoming desensitized to evil. Look at the horrific destruction that is wrought.

However, how does one balance that horror and dismay with hopeful action? How could someone consumed by the pain of what they are fighting against ever last in a ministry for any length of time?

Both are valid and equally dangerous consequences. The two passages cited below are key to those who labor day after day on the frontlines of the anti-abortion movement. It is possible through repeated exposure to grow calloused towards the bloody, horrific photos of aborted babies, or to grow angry and disillusioned by the cruelty of abortive parents, or even to grow disgusted by the infighting of the various pro-life factions. How does one remain sensitive to the horror of abortion without being consumed by grief, or worse, cold to the grief?

“To the angel of the church in Ephesus write: ‘The words of him who holds the seven stars in his right hand, who walks among the seven golden lampstands. “‘I know your works, your toil and your patient endurance, and how you cannot bear with those who are evil, but have tested those who call themselves apostles and are not, and found them to be false. I know you are enduring patiently and bearing up for my name’s sake, and you have not grown weary. But I have this against you, that you have abandoned the love you had at first. Remember therefore from where you have fallen; repent, and do the works you did at first. If not, I will come to you and remove your lampstand from its place, unless you repent. …Revelation 2: 1-3:22

“Because lawlessness is increased, most people’s love will grow cold. But the one who endures to the end, he will be saved.” Matthew 24:12-13

In the Revelation passage, God is warning His people that there is a danger of standing against unbearable evil. He commends the Ephesians for toil, endurance, and not growing weary in the work. He notes that they have stood up for the name of Jesus. However, the love that ignited them at first has grown cold. God urges then to remember that love, repent of having lost it, and go back to it.

What love is the scripture referring to? They are standing for Christ’s name and continuing His work but the motivation is no longer the proper motivation. Rather than motivated by the intense love for Christ, they are perhaps now primarily motivated by hatred of the evil that they are fighting. We should hate evil…but I wonder if God is warning them that unless their motivation is out of love for the Lord, their “lampstand will be removed.” Their ability to shine the light of Jesus will no longer be available to them.

This thought is further supported in the second verse cited in Matthew 24. Lawlessness (evil)  is so rampant that the love of God’s people grows cold. But they are warned to endure to the end, presumably with their love ignited for God, and they will be saved.

I know that words like murder repel those entering the center, so I soften it at times to urge the women to approach me. I say gentler things such as: “Don’t harm your child!” Harm? The baby is going to be brutally ripped apart limb by limb or poisoned in a pill abortion. I speak this way purposefully to draw the woman out of that place to engage with our teams and hopefully change her mind and heart towards God. However, there is a danger that I will lose sight of the severity of what is happening or convey to her a wrong perception of abortion.

The second aspect of desensitization is to hate those engaged in this terrible sin. We can grow desensitized to God’s beseeching love and to forget that we were also once hopelessly lost. All regenerative hearts are the work of God and the Holy Spirit!

If we are consumed by hate and we are in ministry fueled by hate, we will never endure and our work will be compromised.

So what is the answer?

Remember therefore from where you have fallen; repent, and do the works you did at first.

Remember what God has done for you. Don’t forget who you were without Him. Remember those who are lost are in that same terrible place you once were.

Recognize as quickly as possible the hatred or the callousness that is beginning to enter your heart and ask God to remove it. Periods of fasting, prayer, and study of scripture are critical in this vital action.

Do the work God called you to do with a passionate love for Him and what He accomplished in your soul…as you did when you first knew the incredible moment of salvation.

And then endure. Don’t give up. Do not abandon the work God has set before you until you cross the finish line.

We recently did a podcast about this very subject on the “Gospel-Centered Pro-Life” podcast. We think it will be an encouragement to you as you continue to serve the Lord on the sidewalks. Check it out below or wherever you get your podcasts. 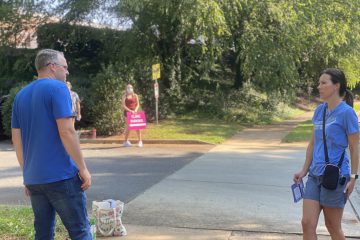 How To Keep Sidewalk Volunteers

How Can a Prolife Ministry Keep Sidewalk Volunteers? You are a pro-life ministry or a leader trying to train and gather volunteers to speak in front of abortion centers. You have spent hours training and Read more… 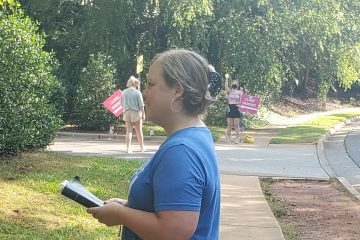 “The most important duty of missionaries is to teach people about Jesus Christ, and His great commandment to love God and to love others. This means ensuring that their actions not only fulfill a need Read more…

Most prolife groups will have their share of protesters and opposition to their ministry. For those of us on the sidewalks of abortion centers, the opposition from pro-abortion advocates can be fierce and discouraging. The Read more…